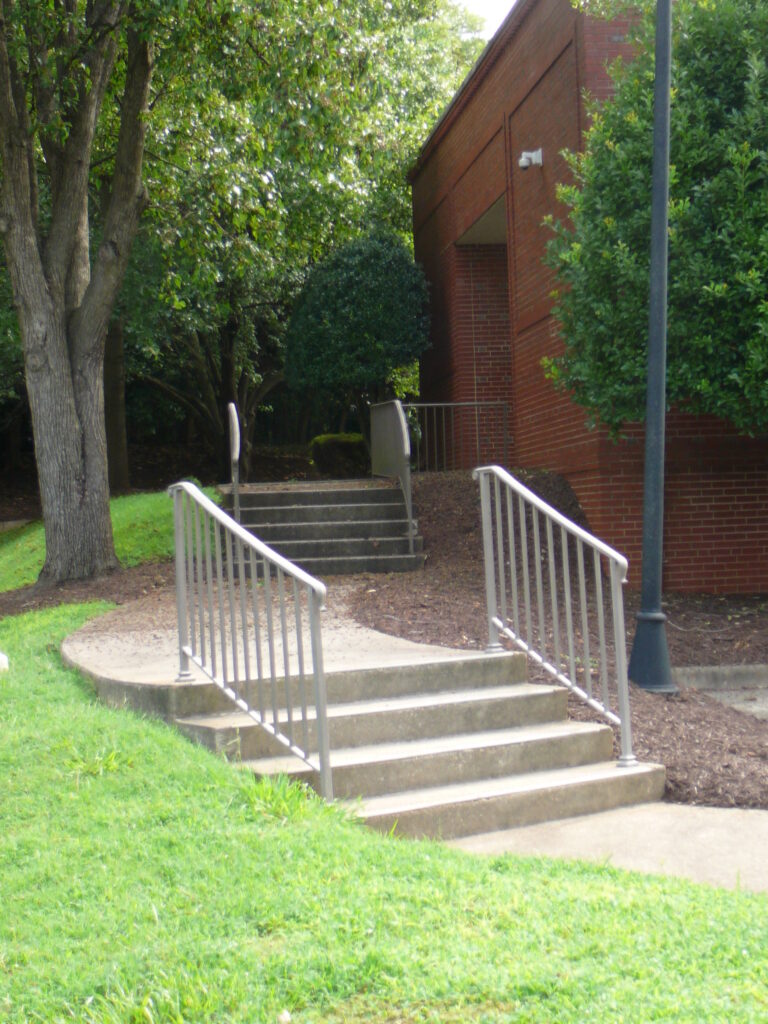 Coming up the steps...

Coming up the steps to Community House (from the  parking lot nearest the street) you are greeted immediately with a simple yet dignified architecture that is both unpretentious yet well taken care of. There is a kind of benevolence that shows in every aspect of the building and its surrounding grounds.

While there is a level access for physically challenged members around back, the front-facing entrance is characterized by terraces and large trees.

This lends a stately and peace-giving atmosphere to the grounds at first impression. This peaceful dignity stays with you the whole way, no matter where you are or what area you find yourself in.

Rounding the Corner (at the top of the steps)

As you get to the top of the steps, you enter a nicely landscaped area that is refreshing and breezy during the hot days of summer. This is a favorite area to walk to and get some ‘head-space’ as you take in the views across the city (from the top of Harmony House Hill).

Peeking around the corner you can take in the entire rear Plaza, where we hold many of our Community House Events and most of our outdoor activities. It is level near the back and provides easy access for wheel-chairs and walkers. 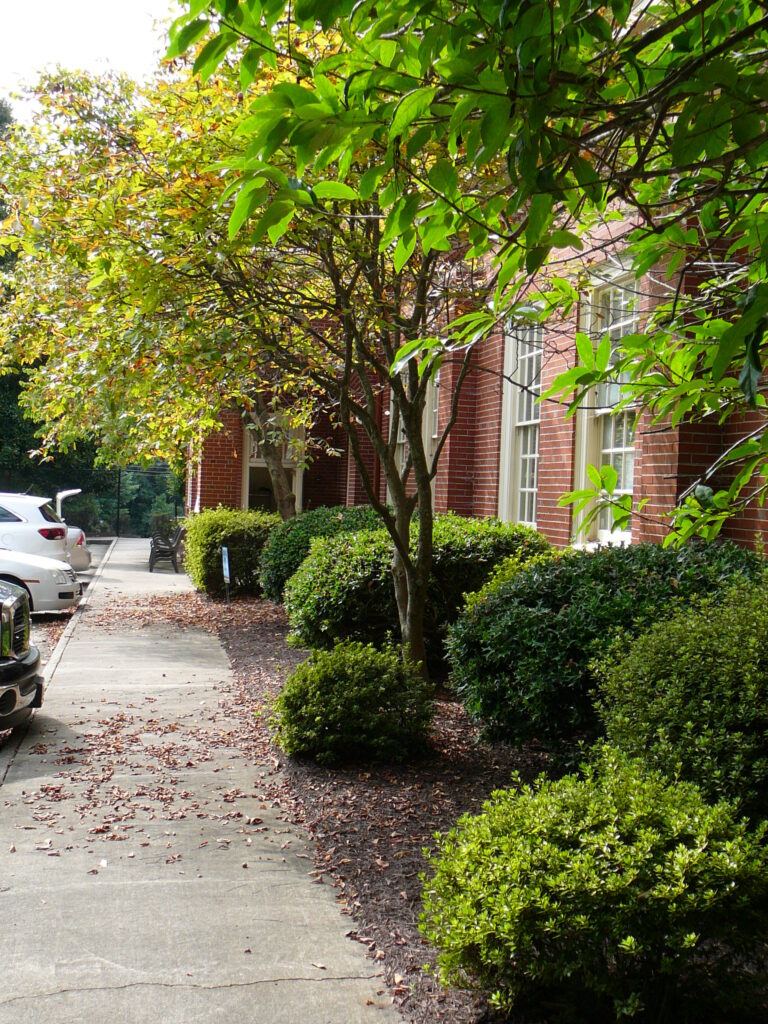 View up the Front Walk

Once you round the corner at the top of the steps, you can see the long, flat sidewalk across the front of Community House. You’ll immediately notice the pretty landscaping along the foundation. These are well-established shrubs and small trees. There are a few notable horticultural specimens (more about this below). Community House has been around for a while (and is well-established, too).

In this photo, you can easily see how level it is. The Handicapped Parking spaces are right in fron of the door (if you look hard enough, you can see the little blue sign).

Along the Plaza walkway are a number of horticultural specimen plantings. Most notable among these would have to be the extraordinary Scarlet Buck-eyes. This is an expecially dear and beloved small tree.

Scarlet Buck-eyes are native plants, very closely related to their forested mountain cousins, the Buck-eye Chestnut. It was the Mountain Chestnut that grew so enormous and covered the hills in rich forest becoming a Southern Appalachian habitat with its oil rich chestnut harvest each autumn.

The Scarlet Buck-eye is its smaller, native piedmont cousin which sports much showier, bright red flowers in the spring. Native from Piedmont Virginia to East Texas, it is treasured as an ornamental planting all over the Southeast.

Hummingbirds and butterflies just love the tubular red flowers which produce hard little nuts in the fall. Don’t try to eat these nuts though, because they are full of soap and taste horrible. All that soap might give you a really bad tummy-ache! 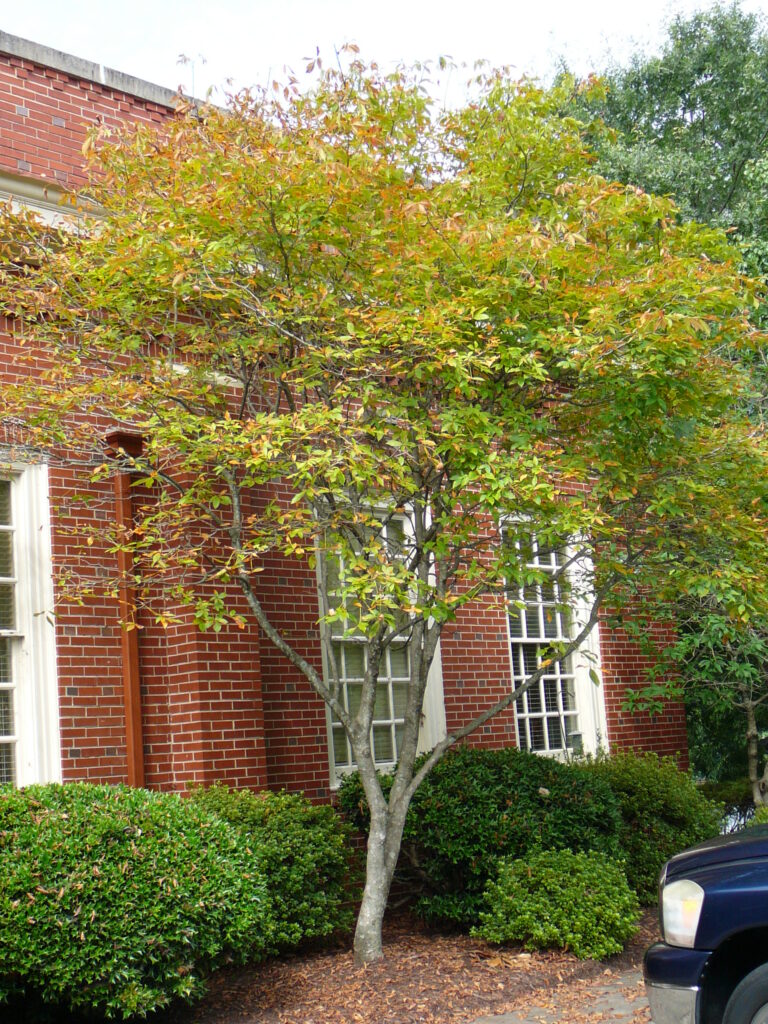 Community House has a Supportive Employment Program that has specialties in Grounds-keeping and Landscape Maintenance. For More information, hit the button below... 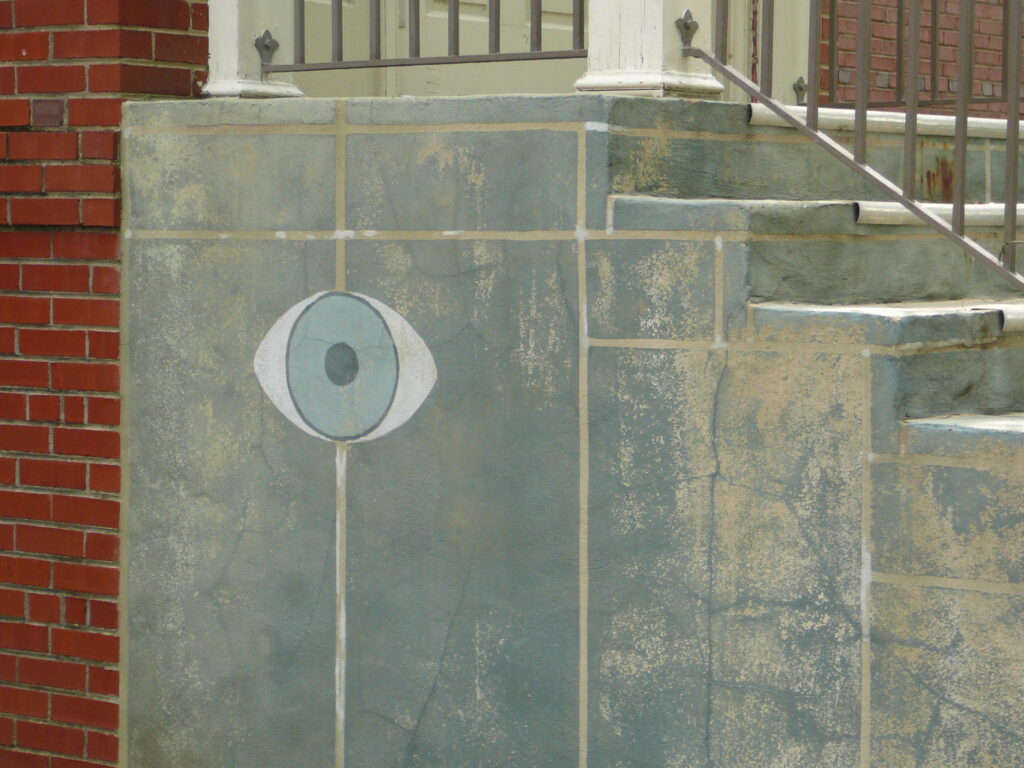 Community House has always been strong in the Arts (and Music). We have classes taught especially for Artists, by Artists. Find out more below...

We talked about the Buck-eye Chestnut (whose name comes from its seed becaue it reminded pioneers of a deer’s eye), but have you ever seen this as you walk around the Harmony House grounds?

Since the rear-facing Plaza is level and un-terraced and there are very few steps (if any) on that side of the building; can you figure out where this feature might be located?

Some say it represents the ‘All-Seeing-Eye of Consciousness’ and thus symbolizes ‘Psyche’ or psychology and good mental health. Others say it is from one of our many resident artists over the years. What do you think?